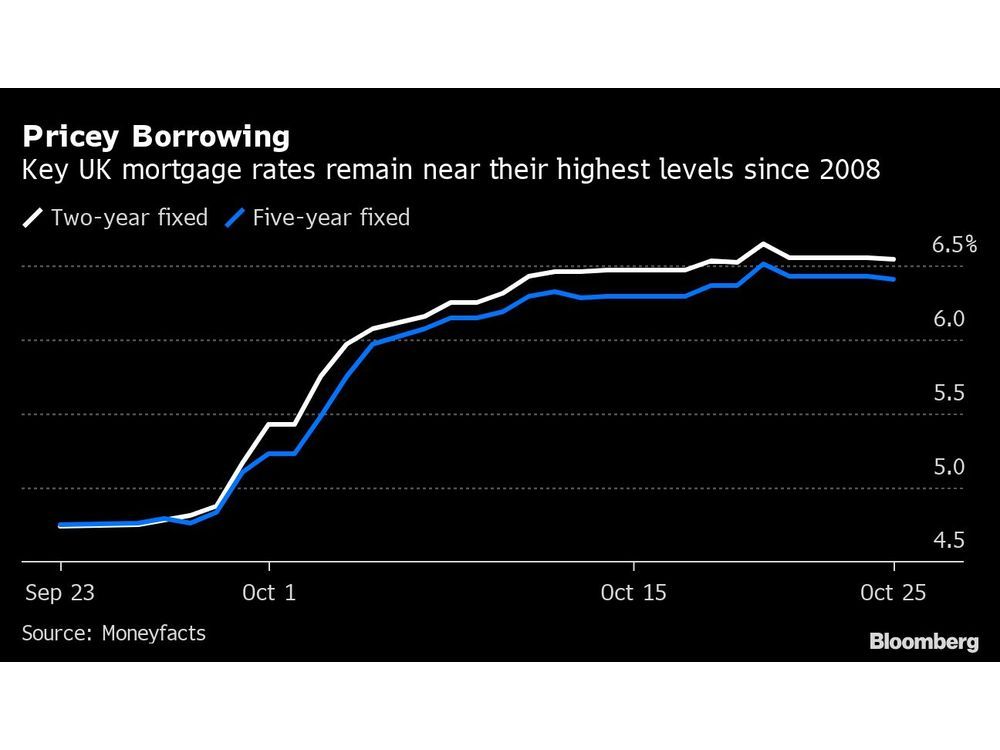 (Bloomberg) — Britain’s banks are preparing for a wave of homeowners struggling to pay their mortgage bills after borrowing costs tripled this year.

Barclays Plc, HSBC Holdings Plc and Lloyds Banking Group Plc are among lenders assigning more workers to deal with customers who are struggling to service their loans. Nearly one in four people with mortgages are already struggling to pay repayments, according to a survey, as the cost of daily living rises at the fastest rate in four decades.

Sign up to receive the best daily stories from the Financial Post, a division of Postmedia Network Inc.

Thank you for your registration!

A welcome email is on the way. If you don’t see it, please check your spam folder.

The next issue of Financial Post Top Stories will soon be in your inbox.

We encountered a problem during your registration. Try Again

Cheap credit after the financial crisis has pushed up house prices, leaving borrowers vulnerable to sharp increases in the cost of lending as central banks try to tame inflation. Banks and building societies want to prevent a repeat of the housing crash of the 1990s as mortgage rates have soared and house prices have fallen, leading to an increase in foreclosures.

“Lenders are aware that foreclosures mean a sudden increase in the supply of housing on the market, which can lower property prices more than they would otherwise,” said Natacha Postel-Vinay, assistant professor at the London School of Economics who studies banking crises and mortgage debt.

“This could lead to a downward spiral with more borrowers underwater, and in turn deeper price reductions.”

Measures to help customers vary from lender to lender and are only meant to remain in place for a short time, according to a person with knowledge of the matter, who asked not to be named as he is not authorized to discuss it.

They can include a six-month break on payments and extend the term of the loan to reduce expenses, the person said.

UK homeowners are particularly vulnerable to rising rates as they typically lock in their mortgage contract for two or five years. Around 1.8 million households are due to refinance next year and the market turmoil triggered by September’s mini-budget has left the average cost of a two-year fixed-rate mortgage at around 6.5%, comparable to 2008 rates.

“Short-term fixed rates are a peculiarity of the UK, which makes the situation even scarier,” Postel-Vinay said. “With their supermarket bills rising, some households will indeed find it very difficult to meet their higher mortgage payments.”

Soaring reimbursement costs will be a major test of the affordability test introduced by the Bank of England in 2014 to limit systemic risk in the aftermath of the financial crisis. Lenders were required to assess whether borrowers could still pay their mortgages if the rate rose three percentage points from when the loan was made – a scenario many will now face for real.

Covid-19 has provided evidence that borrowers may not be as robust as expected, although many have accumulated savings in the meantime. Nearly three million payment deferrals have been granted to homeowners during the pandemic, out of an estimated total of 6.8 million mortgages and home loans in 2020.

HSBC is already showing some signs of caution. The bank has moved more than $8bn of UK loans, many of them mortgages, into a stage 2 loan category this year, meaning they are more at risk but not yet in default. That’s a 172% increase from the end of last year, although the bank warns the move simply reflects rising interest rates and there are no signs of mounting stress at the within the group at this stage.

The lender’s central scenario is that home prices will rise over the next two years. In contrast, Bloomberg Economics expects values ​​to fall around 10% in 2023.

Lloyds has already written to around 220,000 mortgage customers about their loans and plans to contact 30,000 more on variable rates over the next few weeks to ask if they want to reduce the cost of their monthly payments.

It is also too early to see the effects of pressure on consumers in sterling mortgage-backed bond spreads, which widened during the broad sell-off that hosted the UK mini-budget last month. , but have since calmed down. Still, the spreads are around 150 basis points, compared to less than 100 before Russia’s invasion of Ukraine.

Indeed, the market sees unemployment as the main driver of foreclosures, according to Rob Ford, founding partner and portfolio manager at TwentyFour Asset Management LLP. “Right now it’s near record highs and job vacancies are still very high,” he said.

However, the doping combination mortgage ratesdouble-digit inflation and unprecedented energy costs are already proving too much for some borrowers.

Claims for mortgage possession rose 39% to almost 3,500 in the three months to June compared with the same period a year earlier, according to data from the UK Ministry of Justice. Seizures by county bailiffs soared more than 1,600% to 770 during the same period.

Those numbers remain well below pre-coronavirus levels, despite the big jump, showing that lenders have learned to take a wait-and-see approach.

“Banks are going to do whatever they can” to “help their borrowers, especially if they can see it as a short-term measure,” said Ray Boulger, director of loan broker John Charcol, by telephone. “The government and the regulator will pressure them to accommodate people where possible because the last thing they want is for people to be taken back.”