USD/JPY’s two-month run came to a halt as falling Treasury yields undermined the pair’s most powerful logic, while slowing growth in China, turmoil in stocks and the Expected slowdown in Federal Reserve rate hikes on the US economy brought a modest boost to the yen’s safety trade.

Since Monday’s open at 130.55, USD/JPY was down 1.5% to Friday’s Asian open at 128.60. Most of the loss came with Thursday’s 1.1% plunge just four days after USD/JPY traded to a two-decade high at 131.25. The yen’s reversal occurred even as the dollar rose sharply against all other major currencies and in the dollar index. Falling stock prices around the world, war in Ukraine, lockdowns in China, and soaring inflation and food prices have pushed investors toward the safety of the US dollar and assets in recent weeks. .

Treasury yields had fallen through Thursday, helping the yen rally as investors sought safety in US government debt. The explosion of the gap between US and Japanese government debt since January had fueled the dollar’s rise. 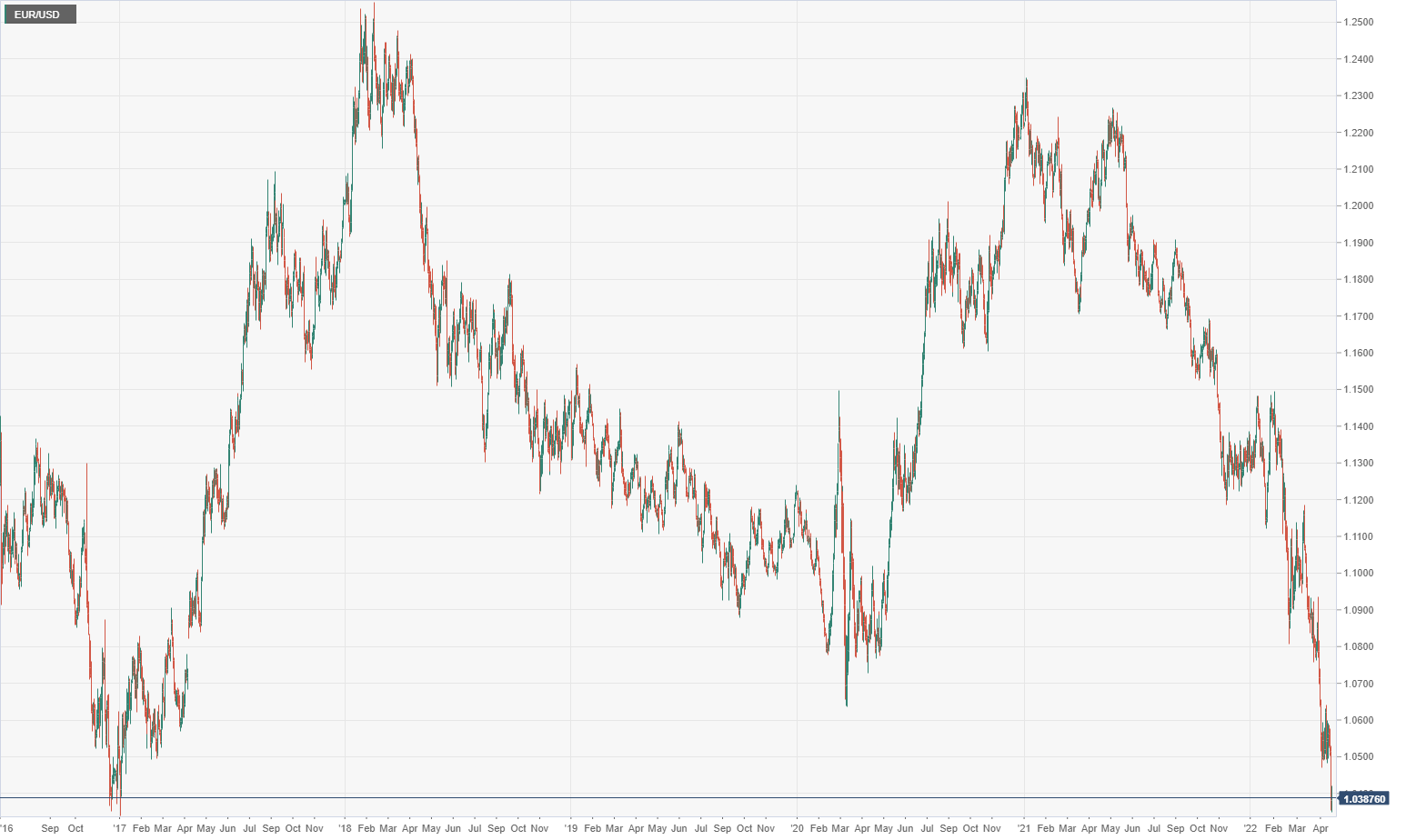 Consumer prices and US sentiment weighed on the market outlook for the US economy. The April CPI at 8.3% overall and 6.2% for the core was slightly lower than the March figures, but higher than expected. Combined with producer prices at 11%, inflation increasingly appears to be a long-term phenomenon, highlighting the Federal Reserve’s aggressive rate policy. Michigan’s consumer confidence index for April fell to 59.1, well below the forecast of 64.0, the weakest reading since August 2011 and the second weakest since the financial crisis.

If the US consumer falters in the second quarter, a recession as traditionally defined becomes increasingly possible.

The Bank of Japan’s (BoJ) April meeting summary highlighted the central bank’s extreme accommodative policy. The contrast with the US, UK and Canadian central banks is the main source of yen weakness. Japan’s economic sentiment indices showed a slight improvement in April, but not enough to impact the market outlook.

Technical considerations also contributed to the rally in the yen. Wednesday’s modest 50 point loss and close at 129.98 broke through the bullish channel that had been the dominant formation since March 7 for USD/JPY’s 14.0% gain. Thursday’s drop confirmed the breakout and Friday’s bounce remained well below the lower boundary of the channel now just above 131.00.

The interest rate fundamentals that have propelled USD/JPY higher since early March remain intact. Inflation in the United States shows few signs of abating and the longer it stays high, the harder it will be to eradicate. The Federal Reserve will persist in raising rates as long as US economic growth allows.

If US growth fades, the widespread fear of recession, evident in equity markets around the world, will fund the trade in safety against the dollar.

Treasury rates retreated from their highs and USD/JPY moved with them. Concerns over US economic growth in the second and third quarters should cap Treasury rates for the immediate future, which in turn will delay further USD/JPY ascent.

Japan’s first quarter annualized GDP is expected to be -1.8% and -1.2% (year-on-year). Growth was negative in the first and third quarters and the expected continuation of the trend for a second year highlights the fragility of the Japanese economy. April imports are expected to post the sixth consecutive month of expansion of more than 30%.

Retail sales for April in the United States are expected to show continued moderate growth. Any sign of weakness will undermine stocks and favor safe dollar trading. Sales of existing homes, 90% of the U.S. market, were already down 11.5% in March from the recent high in November as mortgage rates climbed, with another drop expected for April.

Japan statistics from May 9 to May 13

US statistics from May 9 to May 13 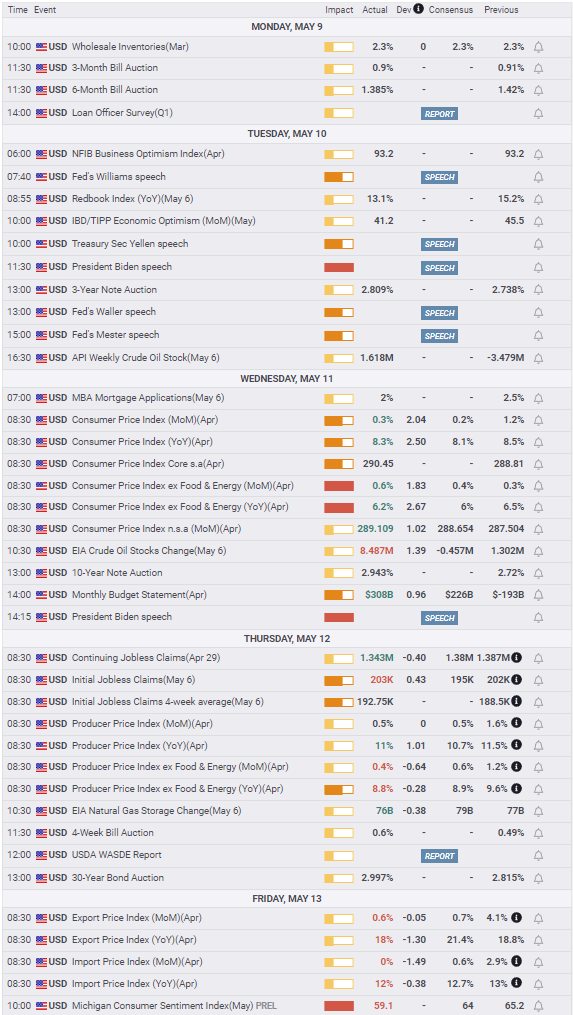 Japan statistics from May 16 to May 20 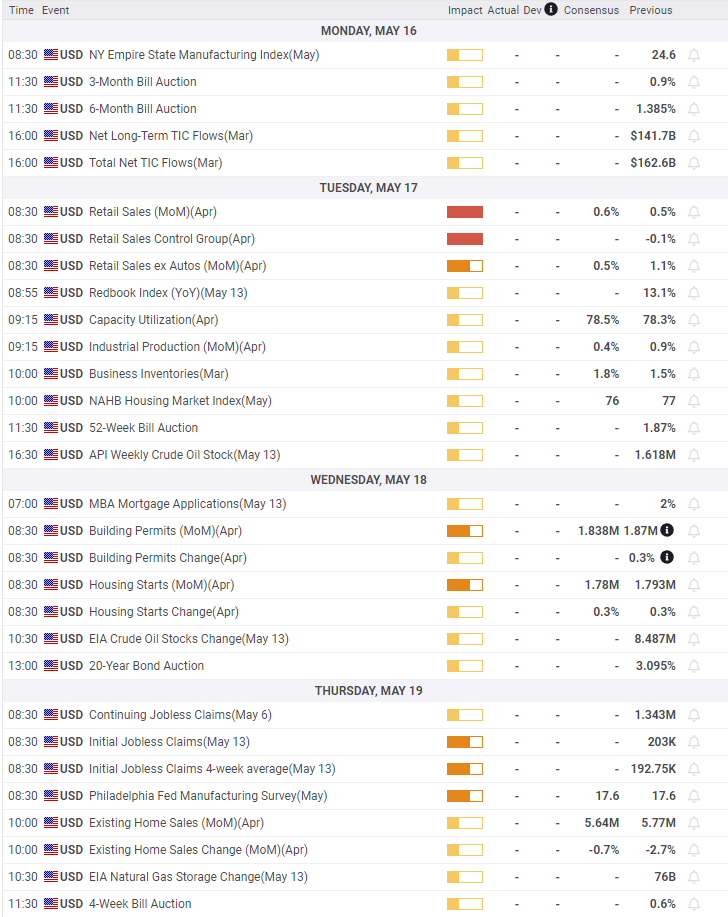 MACD (Moving Average Convergence Divergence) and Relative Strength Index (RSI) signals from May 3 proved to be accurate. The MACD price line crossed the signal line and the RSI broke out of overbought status and the USD/JPY duly turned lower. The lack of follow through underscores the fundamental interest rate nature of USD/JPY’s six-week rise. Volatility in the Average True Range (ATR) remained high even though the movement in the six sessions from May 3 to Thursday was relatively limited. This highlights the potential for movement above and below the market.

With almost no profit having been made on the 14.3% rise in USD/JPY from March 7 to April 28, FXStreet’s forecast survey predicts that technical factors are favoring a decline. These will gain more and more weight as USD/JPY fails to break above 131.00.